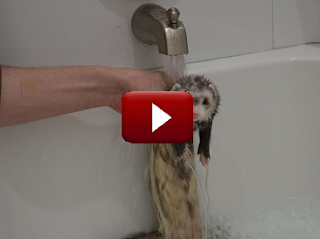 Q: Why does my ferret stink like he needs a bath? I give him a bath, and he just stank worse! Is there anything I can do to make his musky smell go away?

A: Your foremost question, why does my ferret stink? There are several reasons:

Remember that your ferret is actually a carnivore and is genetically similar to the skunk, otter, badger…weasel. The distinctive ferret odor comes from musk glands in the epidermis, which are concentrated in the face and spread over the rest of the body.

Listed below are 7 tips for odor-free ferret care:

How Much Do Ferrets Smell?

I live in a two bedroom apartment with my 3 ferrets. Visitors can’t smell them unless I forgot to empty the litter box that day. If I have guests over and realize I forgot, I find that a strong scented candle can normally cover the smell.

They shouldn’t make your home smell any worse than a dog or cat does. Yes, they have a certain “earthy” musk, but unless your ferret is sick or you take improper care of them, it shouldn’t permeate the whole house.

I Actually don’t use water additives. I feel that if it their own poo odorless, what is it doing to their bodies?

The strongest contributor to ferret odor happens to be hormonal activity. Hormones stimulate musk creation in the body glands.  Washing frequently adds to the odor because it dries out the body and also causes the oil and  scent glands to create much more musk.

Dirty ears is one more common reason for bad smell. Ferret ears produce quite a smelly earwax, which means you should clean your ferret’s ears each week. If your ferret’s ears are particularly stinky and the wax happens to be black colored, the ferret could have ear mites. This was my ferret Critter’s dilemma, and from the moment the ear mites cleared up, so did her smell.

In ferrets as in humans, bad breath can be caused by oral problems. Ferret teeth should be brushed on a regular basis with a pet toothbrush and pet toothpaste (they actually make a neat meat flavored toothpaste for dogs, which should work just as well for ferrets reluctant to have their teeth brushed.)

Otherwise, tartar may promptly develop. Tartar by itself could very well be smelly, however prolonged-term tartar buildup causes gum and tooth infections, that cause bad breath or halitosis, in addition to kidney diseases in ferrets.

Thoroughly clean the ferret’s hammocks, slumber sacks, and towels in the laundry every week. They absorb odors and oils from the ferret’s skin and stink if you don’t wash out them frequently.

Tidy all of the cage EXCEPTIONALLY thoroughly once a week, scrubbing bars and the cage floor and also shelves, washing the food and water bottles, replacing whatever litter/bedding you’re using with fresh.

Do not use wood shavings for the ferret, though. It aggravates their breathing systems. The ONLY safe wood-based bedding is Aspen shavings. Personally I use and also endorse CareFresh bedding.

Try not to use cedar in the litter box (or anywhere else.) Cedar causes asthmatic difficulties in ferrets. Generally, wood shavings don’t do a good job of absorbing both wetness and odors.

I find that the biggest smeller is the waste area.   Keeping the litter box clean will significantly reduce odors. Clean solid waste from the litter box each morning and afternoon, and completely change out all litter weekly.

If your ferret has free range of the house, make sure there isn’t a concealed pile of poop somewhere that is dry and aging.  My kids are free roam and litter trained but often times they put a pile somewhere in a corner and I smell this musky odor that I have to search out and clean.

Then, I put a litter box in that spot because that’s where a new toilet place is designated. The interesting thing with ferrets is that when they decide that they’ve gotta go, they’ve ACTUALLY gotta go and also they won’t put a lot of effort into searching out a toilet.

My ferrets are well toilet trained because I have around 12 boxes in places around my home, but the location of the boxes is always changing, so you should adjust for maximum efficiency.

It is my opinion they alter dens and potty areas because it’s a natural thing in their habitat. It keeps predators from pin pointing them where they are sleeping.

Quality food is actually a serious problem for ferrets.  I like Innova/Evo from feed stores, and I feed a blend of baby food – chicken or even turkey and also A/D Hills cat meals and also uncooked chicken.  If you feed them a meat diet, with no grains, you’ll notice a positive change.

Kibble for ferrets needs to be at a minimum 35% protein, 20% fat, and also less than 3% fiber. At least 4 of the 1st 6 ingredients should be meat. Some cat foods are okay, provided they qualify. Good brands are Wysong Ferret Epigen 90, EVO ferret, usual golden Ferret, and also 8in1 Ultimate Crunchy. Good cat brands also include EVO cat, Orijen, Go! Fit and also Free, Wellness Core, Natures Variety Instinct, and Sapphire Wilderness Kitten..
Clean often, and make use of a mild bleach or different kind of disinfectant for bacteria reduction, and feed a meat diet, and also you’ll have a healthier and odor-free ferret.

Should My Ferret Be Descented?

Descenting a ferret has little to do with general ferret odor, it only removes their ability to “poof”, sort of like a fart, although it dissapates rapidly. All pet store ferrets in the US have long descented their ferrets. (Although It is my opinion they use it as a marketing approach).

The procedure happens to be illegal in the UK as it is seen as cruel. Neutering actually does help since hormones make them smell much more (I Actually guess they think their odor is attractive?), but most petstore ferrets in the US already come fixed.

Ferrets only reek if you’re not taking the time and effort to care for them. The best method to keep the odor down is to clean his litter SEVEN DAYS A WEEK!  Also, clean his cage once a week.  Clean his bedding weekly. 90% of a ferret’s odor originates from his poo and his habitat, not the ferret himself.

Ferrets do have a scent nonetheless it may be controlled by Neutering, eating a good diet, and cleaning litter regularly. This is basic care tips you should use with all pets, actually.

Ferrets DO stink and also poop, smell like musk, and sometimes chew, unless they are trained, but if you’re prepared for that, they really are fantastic pets, clever, sweet, funny and thrilling.