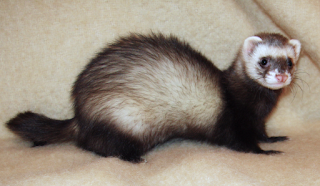 Q: What Caused my Ferret to Suddenly Lose Weight?

A: Ferrets lose weight because the seasons change, and they shed their heavy winter coat. Ferrets aren’t very heavy to begin with, so any weight loss quickly becomes obvious.

If the ferret is losing weight due to worms, you’ll notice:

Sometimes vets will treat worms with oral medication (a pill or liquid, if the patient is cooperative), other vets jump straight to giving an injection (generally they’ll get ivermectin). If you have multiple ferrets or other pets besides your ferrets, they should probably all be tested and treated for worms.

Ferrets can also get heartworms, which due to their small size, quickly become fatal to them. You can treat these with heartguard, advantix, or revolution medication – just ask your vet which is best.

Weight loss can be caused by so many things in ferrets, it’s hard to point to just one cause, so it’s best to get to the vet asap for a checkup and proper diagnosis.

You should ask yourself: how old is my ferret? If your vet does a checkup, and doesn’t find anything else wrong with him, then your ferret could simply be getting frail from old age. I brought one of my ferrets to the vet a few weeks ago for a wellness check, and there was another ferret owner there who was concerned about weight loss, lethargy, and lack of appetite in his little one. After having multiple tests done to rule other all other major ferret illnesses (and there are a lot of them!) he found out the symptoms were just caused by his 6 year old ferret’s advanced age.

Duck soup is a great recipe to promote weight gain in skinny ferrets.  To make it even more calorie dense, you can even add some heavy whipping cream to the mix. Ferrets are at risk of milk allergies, but heavy whipping cream is fatty enough that it seems to be okay for their systems. You can also give him a tablespoon per day by itself – but I wouldn’t feed any more than that, or he might throw it up. Again, the fats in the cream help his weight gain, and can also give him a healthier, shinier coat.

If your ferret is weak and not eating, squirt it small amounts at a time into their mouth with a syringe or eye dropper.  Your ferrets should ideally eat only meat, so you can use this opportunity to transition them slowly to a raw/whole prey diet. They also do quite well on a high protein cat food or ferret kibble.

If you’re putting egg into the duck soup, be sure to cook it first, as the salmonella can make a poor sick ferret even sicker than he was.

If you haven’t already, collect a sample of your ferret’s stool, so the vet can do a fecal float to rule out worms. It’s also a good idea to bring newly adopted ferrets to the veterinarian for a checkup (the vet might also require a stool sample then). Intestinal worms are not difficult to treat, although they’re not something you want to let go.

If you have multiple ferrets or other pets, collect as much stool samples as possible, because sometimes parasite eggs show up in some poop, but can be absent in another. If just one ferret has worms, or some other disease that causes weight loss, you should treat all of your ferrets, to prevent any re-infection.