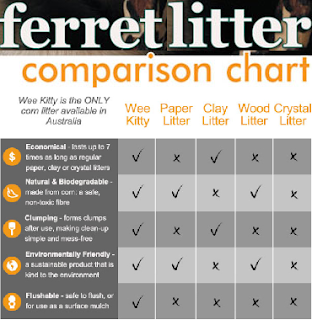 In my ferret owning experience, the only cat litter safe for ferrets would be a paper pellet litter like Yesterdays News.

Ferrets have a tendency to snorkle through stuff with their noses. The problem with clumping cat litter is it can get in sensitive sinus passages and become a cement clot. I wouldn’t recommend it.

I use wee wee pads intended for potty training puppies. I have found they are amazingly absorbent and such easy clean up. But my guys don’t shred things so these works for them.

There are many ferret-safe litters out there, including wood stove pellets, shredded paper, recycled newspaper, corncobs, or clay. However, “natural” ferret litters like corn cobs and shredded newspaper tend to lack absorbency, and break apart, creating one big, soggy mess.

I’ve found that the cheapest and most effective litter for absorbency purposes is actually wood stove pellets, versus paper or other natural-based litters.

Cat litters that are recommended:

Healthy plus is a good wood-based cat litter for ferrets, and is cheaper than feline pine. However, buying wood stove pellets directly beats the price of any compressed sawdust/wood cat litter you can find in the stores.


I use the wood pellets, we get them from a Feed&Seed store (some people use them for horse stalls). I love them – they are cheap and we always have 2 bags on hand so we never run out. They will crumble when peed on but they scoop up easily. Some “brands” are better then others. I tried some from the hardware store (for pellet stoves) and they were smaller and not as good as the ones we get now.

And the best part is: the price! A 40 plus pound bag of wood stove pellets costs under 5 dollars at your local hardware or feed store. It’s simply the best all-around litter, for price, availability, absorbency, and ease of cleaning up afterwards.

In fact, wood pellets are the litter of choice for many rescue organizations, including the cat shelter I volunteer for. You can find wood stove pellets at Home Depot, Lowes and also another homestores and also most grocery stores like the Safeway, Fred Meyer and also Albertsons stores here in the Northwest US..

To clean: I use equine pine type pellets. I moisten them a little and they break down into sawdust which is easier to scoop. We’ve tried hardwood pellets but their not as absorbent and don’t control odor as well.

Once they get wet (or peed on) they just break apart nicely into sawdust. If you’re the creative type, you can cut the bottom out of a cat litter pan, and glue a mesh screen to the bottom of it. Then you just shake over the garbage or an old newspaper, and out falls the sawdust!

You can also use puppy pads or newspaper for your ferrets. Since ferrets like to go in corners, put puppy wee wee pads in all corners of your house, and change them out when you notice a mess.

Puppy pads are absorbent and have a synthetic backing to protect the floors however they are costly, newspaper is actually not  absorbent so it needs to be changed along with practically every use. But it is generally free so it’s decidedly more cost effective than puppy pads.

Cat litter is considered a no-no when it comes to ferrets because of two issues. One is that ferrets have delicate respiratory systems and many cat litters are very dusty. Many ferrets like to snorkle through their litter boxes (shove their noses into it) so dusty cat litter can cause breathing problems for them down the road.

After using the bathroom, a ferret’s rectum bulges a bit, and since they’re lower to the ground than cats, their rectums can come in contact with the litter, creating a painful blockage or infection.

Clumping litter can also come in contact with their nose, eyes, and mouth (yes, some ferrets do eat litter) so clumping clay litter is definitely not a good idea for them. Yep, clay litter is damaging to everybody–ferrets, cats, people, and also the environment.

Unlike wood pellets, which have been broken down and processed into pressed sawdust, wood shaving litter is wood in it’s simplest, most natural form. Wood shavings aren’t dangerous because they’re dusty, like clay litters, but rather because of the essential oils that can bother ferrets’ sensitive respiratory passages.

The biggest, offenders, containing the most oil, are pine, cedar, and fir wood shavings. These woods release their oils when snorkeled in, or when wetted by urination. Ferrets then inhale the liberated oil droplets, which can cause serious damage and burning to their esophagus and lungs.

1.) Go with a recycled paper litter like good mews. Other good brands I’ve tried are fresh news, yesterday’s news, kitty glitter, and Marshall’s. My favorite is good mews, however, because it’s the cheapest. You’re also helping the environment – how great is that?

Plus, paper won’t cause damage if the ferret chews a little of it–and it won’t cause a deadly blockage like clay. My favorite are all-natural cat litters, like Swheat Scoop, Yesterday’s News, or perhaps World’s Best Cat Litter.

2.)  I actually really recommend Feline Pine. It’s brilliant material and all-natural. So it can be flushed safely. Look for the black colored and green bag.

3.) The best kind of cat litter I’ve tried for my ferrets was World’s Best Cat Litter. It dissolves when wet, so you can flush it down the toilet without a problem. Also, a word of caution: while I’ve found it to be less dusty than the other cat litters, there’s still a little bit of dust when you first open the bag.

4.) What worked best for me was wood pellets. You might want to avoid pine pellets (because of the oils,) but your local hardware store should have several different varieties. I like Yesterday’s News all-natural pellets, because it’s the most widely available brand where I shop.

If you buy them from the pet store, look in the rodent, bird, and or cat section, but non-branded wood pellets from the hardware store will probably be cheapest.

5.) For my ferrets, it’s cell sorb all the way. It’s a cellulose-based litter, so it’s non-toxic to ferrets, and doesn’t have any of the problems associated with wood or clay based litters. It’s also really cheap – one bag of cell sorb will last my 7 girls all over a month, and that’s with changing the litter numerous times a day. Yay cell sorb, you rock!!

6.) There’s a sterilized wheat grain litter that I use called critter country. I love it because the wheat smells great, even when it’s eliminated on. Most people can’t even tell that I have ferrets – they think I am always baking bread. Ha! The downside is that it’s a bit expensive, and not readily available in many places.