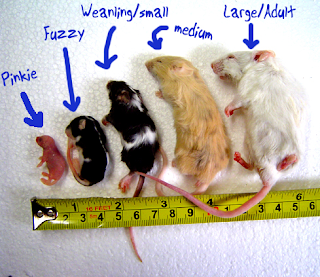 Q: Is it okay to feed pet ferrets mice in their diet? We want to give our one girl a live mouse. I’ve heard they’ll eat raw/live and it’s also better for them.  Our one girl has an immense prey drive and I think she’d enjoy a mouse. My sister in law (who owns pet mice) says it’s cruel to feed mice, live or frozen, to pet ferrets. It’s not cruel or anything..its nature, right? I also give them raw Nature’s Variety pellets until I can do a raw prey diet. (frozen/thawed mice, rats, chicks ect.). . I am working on adding f/t mice into their diet also. How do I get started feeding mice?

A: Good news: A ferret’s odor will scare off every rodent for miles around. Mousing and rabbit hunting was the primary function of ferret domestication up until the mid-1900’s. They fit in tight spaces better than cats.

Ferrets are obligate carnivores and also can only digest meat. Ferrets should eat meat which includes mice or rats. They can most certainly eat mice, however it is recommended to feed pre-killed mice so your ferret doesn’t get hurt killing the mouse..

Here’s a Handy Guide on Feeding Mice to Pet Ferrets:

Note: NEVER unfreeze prey in the microwave (it hardens the bone tissues, which may be dangerous – uncooked bone tissues will  crunch into little pieces and also help clean your ferret’s teeth).

You should slowly get them used to eating mice, since most aren’t used to it. In case this is the first attempt, he might not really understand it’s food.  Mix it with food on the next occasion, or even sprinkle/drizzle a tiny of his standard food on the mouse.. . He may not like the taste.

It’s possible to feed rats too but they HAVE TO BE pre killed. Rats, unlike small mice, are large and will fight back. They’ve long been recognized to kill big lizards/snakes (snakes that weigh 50 lbs) so they can easily harm your ferret. Surprisingly plenty of ferrets will eat a mouse/rat right up.

Will My Ferret Eat My Pet Mouse?

The ferret could probably kill the mouse – but the ferret probably won’t eat it. Ferrets are mousers by instinct. A ferret has an instinct to KILL mice and also rats and are ferocious fighters.

I Actually had a Ferret, he was extremely docile, however he would kill a mouse faster than the 3 cats I own.  Trust me,  your Ferret will go by instinct and KILL the mice.. Please take my advice before  you adopt helpless pet mice.  It does not matter just what the Ferret eats,  his instinct will be to kill mice. The mice are helpless against a Ferret.

Since ferrets imprint on foods at quite a young age your pet wouldn’t see the mouse as food but more as a toy. You can still own a pet mouse when you’re a ferret owner – I do. I just keep it in a split area and don’t ever let the ferret and the mouse get chummy.