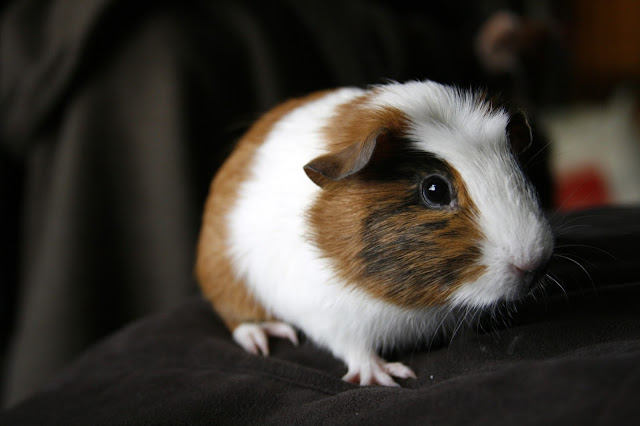 Q: Will my ferret get along with my pet female guinea pig, Carrey?

You will have a dead pet (or two) on your hands if you adopt both a ferret and guinea pig living in the same house. My mother made the mistake of adopting a guinea pig in 1973, while my brother had a ferret in the same house. One day, she came home from school to find blood all over the floor of her room. The ferret had snuck into her bedroom, got in her guinea pig’s cage, and proceeded to maul the poor rodent. The guinea pig was dead, and the ferret was nowhere to be found. They later found the ferret hiding under the couch, shivering, with a large hole in its side from where the guinea pig bit it in defense. My grandparents had to put the ferret down, and my mom’s family lost both pets. Nobody won that day.

Ferrets have a prey drive. They hunt animals in the wild, and eat their meat. Guinea pigs, mice, rabbits, rats – they’re all prey animals. As a vet assistant, I can’t stress how many times I’ve seen dead or dying small pets come in, attacked by a high prey-drive dog species like a Terrier, or sometimes a ferret.

Either adopt one pet, or the other. Please don’t put an innocent rodent like a mouse or a guinea pig in danger by making it live with a ferret. Even if the ferret and guinea pigs are raised together from baby kits, I’m so sorry to say that ferrets and guinea pigs will NEVER ever get along safely.